Federer Downs Gabashvili: Gives us 71 Reasons to Believe His Ranking is Only an After-thought 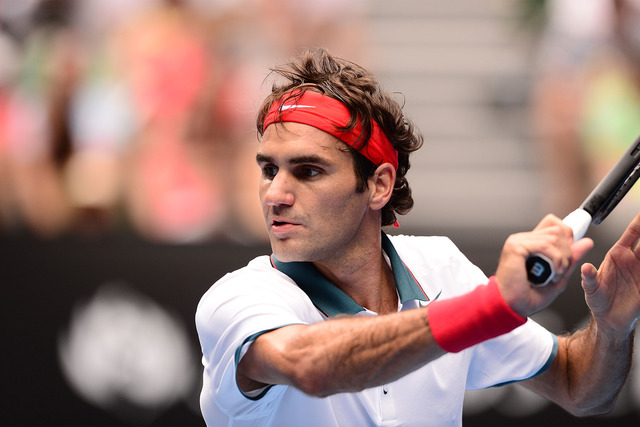 Roger Federer is through to the fourth round of the Australian Open after downing Russian Teymuraz Gabashvili. Federer, having fought back problems through 2013 is looking to slowly reclaim his throne atop the world rankings.

“Things are a little bit more comfortable this year around.” Federer said heading into the tournament.

“I haven’t been sick for some time. My back has been in good shape since Hamburg, no set backs, I feel good, my confidence is there.”

After a shaky start for both players, the Swiss Maestro had consistent answers to the Russians moves, paving the way for a smooth 6-2 6-2 6-3 win over the 79th ranked Gabashvili.

While Gabashvili showed glimpses of true talent and just why he is among the top 100 best players on the planet, Federers famed backhand down the line was out blazing and a pair of breaks in the sixth and eighth games of the first two sets put Federer in the drivers seat before stamping out his authority in the third set finishing off Gabashvili 6-3 in only 29 minutes in the set.

As well as going through to the fourth round of the Australian Open for the 13th time in his career, this win resulted in a milestone at Melbourne Park, Federer being the first player to reach his seventy-first match win in 16 Australian Open appearances.

“I’m just happy waking up in the morning and not feeling like an old man” Said Federer post-match, “so that’s very positive.”

When asked if Novak Djokovic and Rafael Nadal could be dropped from their top 1 and 2 ranks, the Swiss responded with “I do believe so, yes.”

Federer will now go on to play Jo-Wilfried Tsonga who beat fellow Frenchman Gilles Simon 7-6 6-4 6-2. Should he win this fourth round, a potential semi-final rematch of last year may be scheduled against fourth seed Andy Murray who came away with the win this time last year.

The Fed-Ex may be feeling the effects of a long time on the tour, but that things are seeming to shine brightly this early in the season are a strong indicatior that Roger Federer is definitely on the hunt and ready to continue living up to his status as the greatest tennis player of all time.

One thought on “Federer Downs Gabashvili: Gives us 71 Reasons to Believe His Ranking is Only an After-thought”