What Is Wrong With The Browns? 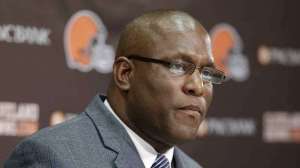 The lowly Cleveland Browns are one of the biggest laughing stocks of the NFL. They have very dedicated fans but no success to show for it. They fired their head coach after just one season, while their GM and CEO also got fired. How can they can fix this franchise?

This team has some promising players like Joe Haden and Jordan Cameron who broke out last year to be a big part of the Cleveland offense, but the number one thing the Browns need is a quarterback. The Browns had so many quarterbacks come and go during the past few years, all turning out to be busts including Derek Anderson, Brady Quinn, Colt McCoy, and Brendan Wedden. Jason Campbell and Bryan Hoyer have been the only two good quarterbacks in the past and 10 years yet even with those guys they did not make the playoffs

In the NFL draft the Browns have two 1st round picks. The 4th pick and the Colts first round pick they got when they traded Trent Richardson which is the 26th pick. They can trade their picks and move up to get a quarterback they want. Looks like they are targeting Texas A&M Quarterback Johnny Manziel, or they can draft Louisville Quarterback Teddy Bridgewater.

Almost every coach the Browns interviewed for their vacant head coaching job did not want to come to Cleveland. Josh Mcdaniels, Lovie Smith, Ken Whisenhunt, Adam Gates. . . the list went on and on until they finally settled on Mike Pettine as their new Head Coach. Owner of the Browns Jimmy Heslam fired Browns GM Michael Lombardi and Browns CEO Joe Banner. They were replaced by Ray Farmer and Alec Scheiner.

Bryan Hoyer was handpicked by Michael Lombardi to be the quarterback but he got hurt during the season and was put on season ending injured Reserved. With the new GM in town, Bryan Hoyer has to prove himself to the new GM that he is the real deal. He told the media that he would be all that he can during training camp and pre-season to be the starting quarterback of the Browns week 1 of the regular season. He has some tough competition with Jason Campbell and whoever the browns draft at Quarterback fighting for the same spot.

Don’t worry Browns Fans, with the new GM and the new CEO in town they are going do whatever they can to bring winning football back to Cleveland. Things are looking bright for you guys, let’s just hope they don’t draft a bust of a quarterback. . . again.