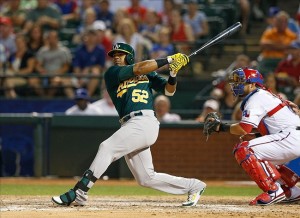 The Oakland Athletics have captured back-to-back AL West titles, but they could have their work cut out for them in the year ahead. The Texas Rangers again boast one of the best offenses in baseball, the Los Angeles Angels and Seattle Mariners should both at least be able to post winning seasons and even the Houston Astros should be improved.

One benefit the A’s  have is their very young and talented team. Each player on the roster know their roles, and they excel at that. There isn’t one household name on the team, and that’s how they like it. Each player steps onto the diamond every game with one thing in mind, and that’s getting the job done and going home with a W.

Donaldson is one of the best up-and-coming third baseman in all of baseball. He has great plate discipline and makes extordinary plays out at the hot corner.

Cespedes rips the laces off the ball. His power is unreal, and one of the best power hitters in the American League. Not only does he have power, he also has other major tools to be a threat anywhere on the diamond. He also has amazing speed, and one of the best arms in the outfield with his great arm strength.

Lowrie is very important to this offense because he is a great contact hitter that hits from both sides of the plate. He is able to reach base by making solid contact, or by taking a walk with his good pitch recognition.  His defense out at shortstop or second isn’t to be reckoned with either. He is always making the plays needed to get the team out of a jam.

This pitching rotation is one of the most consistent in all of baseball. Each starter winning 10 or more games in 2013. During midseason last year the A’s finally found their true ace in Sonny Gray. Gray will look to carry this team on the mound, and he has all the works to do so. He has a great fastball with killer off-speed pitches. Gray may be on an innings count in 2014, but he will still be very effective and dominate every five days he takes the rubber.

The few veterans on this team will also play major roles. The two that come to mind are Coco Crisp and Jim Johnson. Crisp has a World Series under his belt, and will look to help form these young studs into players that will have great careers. Oakland did just give him a 2-year extension, and by all means it may have been one of the best signings in all of baseball this off-season. Johnson will look to help replace Balfour as the closer. He has been a saves machine the past three years, and will have plenty of opportunities in 2014.

Look for the A’s to contend on winning the AL West for the third straight year. They’re a well balanced team that relies on playing small ball. Their 3, 4, and 5 hitters drive in all the runs and do a great job at that. The rotation is very solid and balanced with both lefty and righty pitchers. The bullpen is a strong suite for the team, having many pitchers that are called upon to get a few outs. Bob Melvin has done amazing managing Oakland and looks to continue his success.