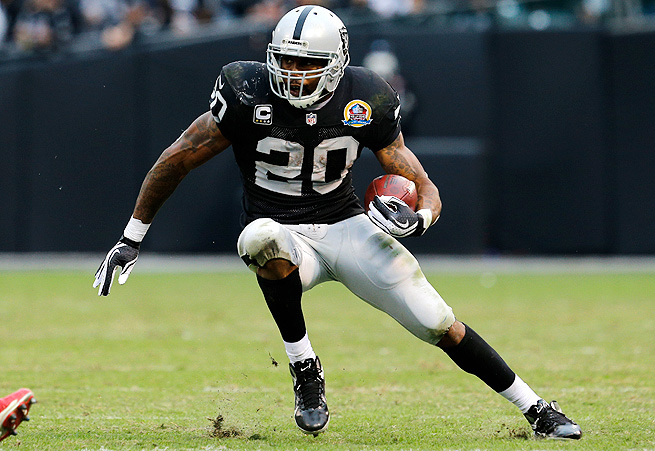 In 2008, the Oakland Raiders drafted running back Darren McFadden with the 4th pick in the draft right out of Arkansas, hoping he would be a franchise player for the Raiders. He turned out to be nothing but an injury prone bust in six seasons with the silver and black.

McFadden, in his six seasons only ran for 23 touchdowns while missing 27 games, raises many eyebrows for a guy that is supposed to be a franchise running back.

The 28-year old running back is a free agent this off-season, and I doubt the Raiders are going to re-sign him to bring him back to Oakland. It also seems like the Raider fans don’t want him back, since he has been giving them, and the front office, a headache for the past six seasons. This might be a chance for McFadden to redeem himself and revitalize his career.

The New York Giants would be a great landing spot for McFadden.

Though they did not make the playoffs in 2013, they are still a playoff caliber team with a playoff caliber quarterback in Eli Manning. Manning is also looking to bounce back after having his worst season of his career. They have a good wide receiver corps, highlighted by Victor Cruz, and a good defense highlighted by Jason Pierre-Paul. They need a running back that can break out a big run from time to time, and improve the 29th rushing offense in the league.

The Arizona Cardinals would also be a good landing spot for McFadden.

They were a playoff favorite at some points in the season, but just missed out on the last week of the regular season, finishing 10-6 in the very tough and wild NFC West. They have a wide receiver corps highlighted by Larry Fitzgerald, who just restructured his contract to give the Cardinals some salary cap space going into the off-season. The Cardinals weren’t much better in the rushing game than the Giants, being 28th in the league. Carson Palmer could open the game up if McFadden can stay healthy.

One thought on “Best Landing Spots for Darren McFadden”