Vanek On His Way Out 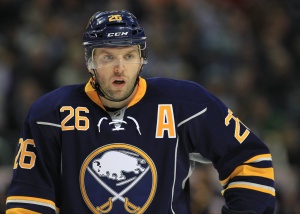 The New York Islanders went out and got a left winger to play with John Tavares when they traded Matt Moulson, a 2014 1st round pick, and a 2015 2nd round pick to the Sabers for Thomas Vanek. This trade helped out the Islanders in the long run for the playoffs and it helped the Sabers in their rebuilding project.

Ever since they made that trade, the Islanders have been going downhill. Now they are 26th in the league and looking at giving Buffalo a top-10 pick in the draft this year.

In 43 games, Thomas Vanek has 15 goals, 24 assists, 39 points and a plus/minus of +7. He declined a 5-year deal to stay with the Islanders as they might be looking to trade him if he does not sign a contract extension.

In 40 games with the Sabers, Matt Moulson has 9 goals, 25 assists, 34 points and a plus/minus of -10. At least a dozen teams are calling the Sabers about a possible trade for Moulson.

The winner of this trade is the Buffalo Sabers because they got rid of a big chunk of salary cap in Vanek, which helps them in their rebuilding project. They got a 1st round pick that should be a top-10 pick so with this trade the Sabers might end up with 2 top 10 picks, their 1st rounder and Islanders 1st rounder. New York Islanders are the losers of this trade because they were projected to be a contender when they traded for Vanek but they are stuck at the bottom on the league.

In other news in the League Trade Talks are heating up between the New York Rangers and their captain Ryan Callahan while both sides are talking about a new contract extension. The Rangers allowed permission for other teams to talk to them about trading for Callahan. Montreal Canadians were close to a deal to land P.A. Parenteau of the Colorado Avalanche before the Avalanche declined the trade.