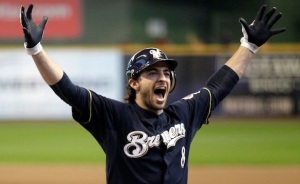 The Brewers had a down season in 2013. Most of it had to do with many key players getting bit by the injury bug or under performance for most the season. Of course no one can forget about the Ryan Braun saga. They did lose some key pieces in Corey Hart, and Norichika Aoki, but the Brewers look to turn everything around with a healthy line-up and solid pitching rotation for the 2014 season.

Milwaukee needed a boost in their pitching rotation, and they achieved that by signing Matt Garza. Garza was one of the most sought after pitchers this season and many GM’s are kicking themselves for not winning the sweepstakes. Matt Garza is a very consistent pitcher, pitches deep into games, rakes up strikeouts, and is very intimidating on the mound. When all his pitches are working he can not be touched. He has won in both the American and National league. He was very consistent in the AL East while pitching for the Tampa Rays, even collecting a no-hitter in his tenure in Tampa.

After losing Corey Hart to the Seattle Mariners in the off-seaon the Brewers had a hole at first base. Well they filled that hole with power hitter Mark Reynolds. When Reynolds plays a majority of the season he is able to produce great power with great RBI numbers. He has power to all gaps and has the speed to stretch a double into a triple when needed. He has a knack of driving in runs. His only downfall is his strikeout rate. If the Brewers are able to get past that then they may have struck gold by signing Reynolds.

Ryan Braun, Aramis Ramirez, Rikki Weeks, and Jonathan Lucroy will be the heart and soul of this offense. Braun will have to block out all the boo’s he will receive once the season starts but should continue to play like a top 5 player in the league when healthy. Ramirez is one of the best hitting third baseman’s in the league. He has tremendous pop in his bat and always finds a way of driving in 100+ RBI’s. If Weeks is able to bounce back from his down 2013 season and hits for power and reaches base with his speed, then he can be a great table setter. Lucroy is an up-and-coming All-Star at the catcher position. He hits for average and is able to go through a couple stretches in the season where the ball finds a way going over the fence.

Yovani Gallardo will have to learn how to pitch without his 95+ mph fastball now. His fastball speed fell to about 93 mph in 2013 and it threw him off. Not allowing him to set up his strikeout pitch in his dirty curveball. He should be able to bounce back in 2014 thanks to Lohse and Garza. Gallardo won’t have the stress on his shoulders now.