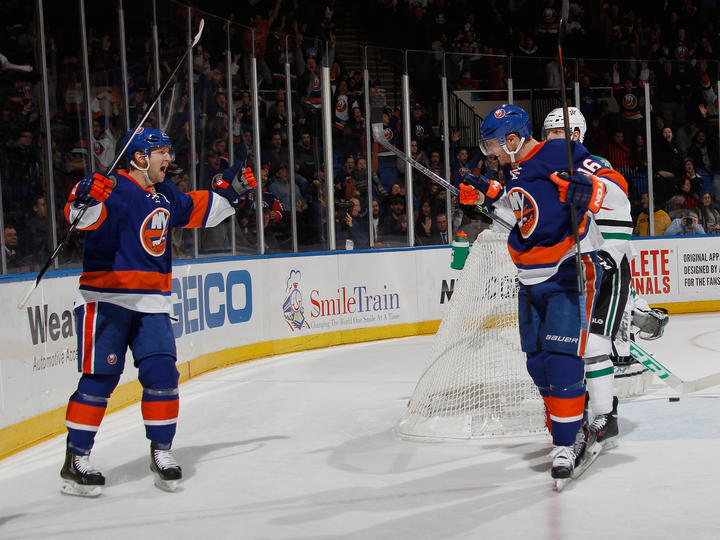 Peter Regin #16 of the New York Islanders (R) celebrates his goal at 9:29 of the second period along with Josh Bailey #12 (L) against the Dallas Stars. (Photo by Bruce Bennett/Getty Images)

The Chicago Blackhawks acquired forwards, Pierre-Marc Bouchard and Peter Regin from the New York Islanders, in exchange for a 2014 fourth-round pick.

Bouchard, who was playing for the Islanders AHL team, Bridgeport Sound Tigers, will report to Chicago’s AHL affiliate, the Rockford Icehogs.

Regin has been apart of the Islanders all season but has sat out as of late, only having seven points in 44 games.

This is a solid trade for Chicago, which adds depth to forwards and their farm system. Regin will have a chance to prove himself in a new system, and hopefully turns his +/- around.

Chicago also sent forward Brand Pirri down to Rockford, who has 11 points in 28 games this season.

The Columbus Blue Jackets acquired Paul Thompson from the Pittsburgh Penguins in exchange for Spencer Machacek.

Both forwards will join their clubs AHL affiliate, Thompson to the Springfield Falcons, and Machacek to the Wilkes-Barre/Scranton Penguins.

Thompson coming off a 20 goal season last year has slowed a bit this season, with four goals in 39 games.  Only 25 years old, he still has room to mature before being called up to the big leagues.

Machacek is having a better season down in the minors, nine goals and 19 points. Also only 25, look for him to break into the Blue Jackets lineup down the road.

The Montreal Canadians dealt Steve Quailer to the Los Angeles Kings, in exchange for Robert Czarnik.

Quailer, one goal and five points in 12 games, will report to the Manchester Monarchs.

Czarnik, one goal and five points in 29 games, will report to the Hamilton Bulldogs.

The trade between AHL players, is also an exchange of 2008 third-round picks. Czarnik being selected 63rd, and Quailer going later, at 86th.