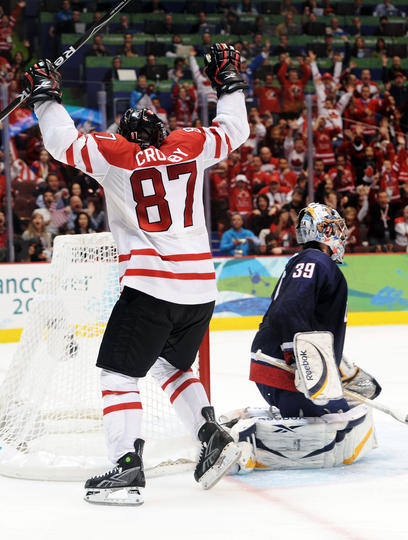 Sidney Crosby #87 of Canada celebrates after scoring the matchwinning goal in overtime whilst a dejected Ryan Miller #39 of the United States looks on during the ice hockey men’s gold medal game between USA and Canada on day 17 of the Vancouver 2010 Winter Olympics at Canada Hockey Place on February 28, 2010 in Vancouver, Canada. (Photo by Harry How/Getty Images)

When you hear those two names, you can all but think about the 2010 Winter Olympics. Crosby beating Miller is one moment few hockey fans around the world will ever forget. These Olympics will have a different feel to it.

There’s a new storyline following Miller around, that being his contract is up at the end of the season. Trade talks and rumors blossom by the hour, on what might happen to the world-class goalie. Factor in trade rumors, and playing on the worst team in the NHL and the answer seems pretty clear: leave.

This is not that easy for an organization that has seen all of Miller’s 538 career games. We’re not talking about trading an aging goaltender; his skills are still there.

Through this season Miller has played in 38 games for the Sabres.  He’s ranked fourth in shots faced (1,339); mind you the top three goalies have all played 44+ games. With all those shots faced, he has 14 wins, a 2.68 goals against average, and an astounding .925 save percentage.

Factor all these statistics in and you would have one very confused goaltender. Do you sign the long term contract extension or accept a trade before the deadline?

It is worth noting Miller has a no trade clause, giving him the veto option if he’s dealt to a bottom tier team.

“I have a limited no-trade agreement,” said Miller, “and that’s something I put out there in the summer. That’s not something they approached about altering, changing or discussing. So let’s just assume they’re doing their business. I can’t control it.”

Tonight’s game will be no easy contest for Miller.

The Pittsburgh Penguins lead the Eastern Conference in points, and have players near the top of all statistical rankings. Led by NHL Points Leader, Sidney Crosby, and NHL Wins leader, Marc-Andre Fleury.

Ryan Miller will be busy tonight, but will this be his last home game in a Sabres sweater at First Niagara Center?

Here’s another video to get you pumped for next week!