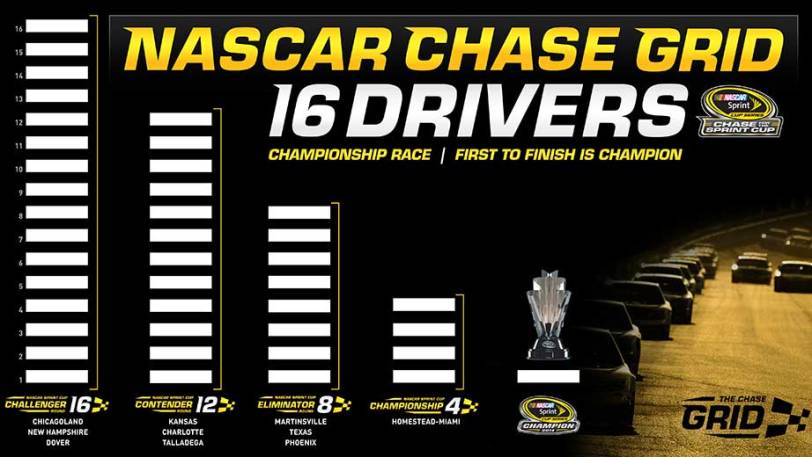 NASCAR added new provisions to it’s Sprint Cup Championship Chase format on Thursday. After three years of consultation with teams, drivers, sponsors and television partners, the 10-race playoff received drastic changes that should make for better racing for all to witness.

The new system will put a focus on winning races. If a driver wins at least one race during the 26-race regular season, they will earn a spot in the Chase, regardless of where they are in the standings.

This puts drivers who run consistently in the regular season but don’t win at a slight disadvantage.

Look back at last season. Brian Vickers, who was 71st in points with one win in only 12 of 26 races, would have made the Chase.

Because of the emphasis on winning, the Chase field expanded from 12 drivers to 16. NASCAR has 16+ drivers capable of getting to Victory Lane, so the limit increase was justified.

Once the playoff field is set after the second Richmond race, the chasers will compete in a four-round elimination style format. The first three rounds, Challenger, Contender and Eliminator, are each composed of three races. The final round, the Sprint Cup Championship, will take place at Homestead-Miami Speedway.

The goal is to eliminate four drivers after each of the first three rounds.

A driver advances through the first three rounds by either winning a race or finishing at the top of the standings, with the number of non-winners moving on depending on the number of Chase drivers who win a race.

The points will reset after the Challenger and Contender rounds.

In the season finale at Homestead-Miami the remaining four drivers will compete to be the first one to cross the finish line. Whoever does so is the Sprint Cup Champion. That simple.

The new system puts teams and drivers in a position where they must outdo their opponents if they want to be in the Championship circle at season’s end. They can’t be content with just points racing, staying out of trouble and earning points here and there to get into the Chase. Because winning is at a premium now, a driver who sits eighth in the points after 26 races could miss the Chase if 16 other drivers have at least one win.

Expect to see a lot of gambles late in the race, especially during a caution with about 20 to go. A team hoping to make the Chase could elect not to pit and put itself out front with a shot at the win.

The changes to NASCAR’s playoff system put the sport up there with other leagues’ championship determining processes. Though to make it even more so there needs to be a way to separate Chasers from non-Chasers points-wise after each race. A system that gives 16 points to the highest Chase finisher and down to one point for the lowest finisher would keep the standings tighter and still promote competition between Chase drivers.

Now that winning races is at the forefront of being eligible for the Chase there is a possibility for a record number of winners in a season.

The Chase for the Sprint Cup just became a bit more interesting.