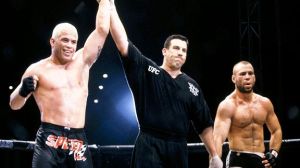 The former UFC light heavyweight champion Tito Ortiz was officially charged with two counts of DUI. These charges came from January 6th when Ortiz crashed his Porche Panamera on the I-405 in Los Angeles. Ortiz was arrested and taken into custody, where he posted a $15,000 bond.

There had been two other passengers in the car, luckily no one was seriously injured. This is Oritz’s first offence of this sort, but he could still be looking at six months in jail and up to a $1,000 fine. Ortiz has been up and down since he left the UFC. He has been signed by Bellator MMA and was supposed to fight another former UFC light heavyweight champion Quinton “Rampage” Jackson back in November, but unfortunately suffered from a neck injury. Joey Beltran took his place and was knocked out by Rampage in the first round.

During a press conference last week, Bellator CEO Bjorn Rebeny commented on the former champion’s situation. He opened up by saying “My hope is that he can put this behind him. Thankfully, no one, including himself, was injured. That is the most important thing.” He also said, “It’s a serious issue. It’s something we take seriously. That’s basically my take on the situation. I’ll deal with that independently with Tito.” That is all Rebeny had to say.

No new news has been released on this situation. The former champion’s future is looking very uncertain at this point in time. Hopefully everything will work out and he can once again return to the cage to entertain fans.