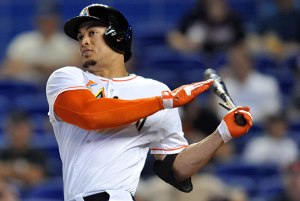 The Marlins and their fans went crazy in the final game of the regular season last year, not due to making the playoffs but because pitcher Henderson Alvarez tossed a no-hitter ending in dramatic fashion, when Giancarlo Stanton rushed to home plate after a wild pitch versus the Detroit Tigers. This game was one of if not the biggest highlights of the Marlins last season. In a year filled with many inconsistencies the Marlins had another losing season, but they do have some young talent that could possibly blossom into great everyday players. The Marlins also discovered a diamond in the rough named Jose Fernandez. The Cuban right hander went on to win the Rookie of the Year award after having a spectacular season with a 12-6 record and a 2.19 ERA.

Miami will need more than just Jose Fernandez to improve this season. Giancarlo Stanton is still the leader of this team and needs to keep producing big power numbers for the fish. Aside from Stanton and Fernandez, Miami has added some interesting players to their club. Jarrod Saltalamacchia will give the Marlins a solid catcher that can play the full season, something the Marlins couldn’t count on last year. Garrett Jones has the potential to swing a good bat as he is only two years removed from when he hit for a .274 batting average and 27 home runs for the Pirates. Rafael Furcal has been brought in to play second base, but he brings a lot more value to this team as he can use his experience and mentor young shortstop Adeiny Hechavarria. Overall the moves the Marlins made make sense, they are looking to develop the young players they have so they brought in experienced players that at the same time can produce strong numbers.

A couple of Miami’s players remain wild cards for this season as they have the ability to have a breakout season sooner or later. Those two players are Henderson Alvarez and Adeiny Hechavarria. As already mentioned, Alvarez had a no-hitter in the final game of last season, and even though he did not have a winning record (5-6) in 17 of his starts, he did earn a respectable 3.59 ERA. Being a pitcher that can get plenty of ground ball outs and showing flashes of what he is capable of doing, don’t be surprised if he has a decent year. Hechavarria’s hitting has been below average through this point in his career. He will enter his third year in the big leagues with a career batting average of .232. I still believe this kid will become a better hitter. He plays shortstop, a premier position, where it is tough to find plenty of offense. The Marlins aren’t too worried about his defense as he is clearly better with the glove than with the bat. If Adeiny can hit somewhere near a .270 batting average, the Marlins will be happy. As for now I still think he is a year or two away from developing into a better player, but keep an eye on him this season as he may show signs of improvement.

It will certainly be a tough season for the Marlins in 2014, but do expect improvement from last year. The fish will benefit greatly from having Jose Fernandez for a full season and will count on Giancarlo Stanton and younger players like Marcell Ozuna, Christian Yelich, and the previously stated Adeiny Hechavarria to step up their game. The Marlins are probably two or three years away from competing for a playoff spot, this year though, they should be capable of avoiding a 100 game loss season and should be near 70 wins.