Ryan Miller On The Move? 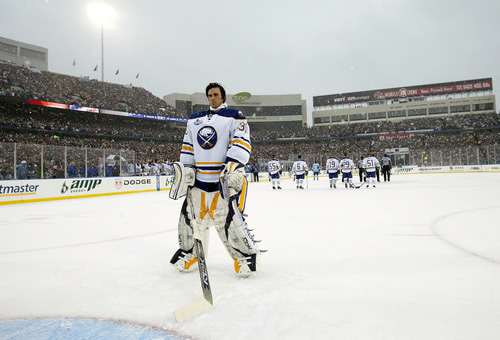 Trade talks for goaltender Ryan Miller have heated up in the last 24 hours. Multiple sources have confirmed the Minnesota Wild and the St. Louis Blues, are very interested in the Team USA goalie.

Minnesota has made the first offer having injuries to both, Nicklas Backstrom and Josh Harding. The offer from the Wild includes a 2014 first round pick, Dany Heatley (and his contract), and a prospect, either Mikail Granlund or Charlie Coyle.  This would be the second major trade in two years between Minnesota and Buffalo.

Buffalo got a first, second, and two prospects for captain Jason Pominville and a fourth round pick last year.

St. Louis is likely to counter with a better offer, as Sabres GM Tim Murray is in St. Louis today.  Buffalo is looking to get prospect Ty Rattie, goaltender Jaroslav Halak, and a first round pick.  This move makes the most sense as Heatley can veto the trade via his No Movement Clause.

If Buffalo makes a move it makes more sense to deal with St. Louis.  The Blues would have a real shot to contend out West, and give a team like Chicago or Anaheim a run for their money come playoff time.

It is worth noting Buffalo has world class, and Team Sweden goaltender Jhonas Enroth signed through next season.

Ryan Miller has been solid for Buffalo, despite playing behind a woefully deficient roster. He has a 2.62 goals against average and a .926 save percentage in 35 games this season.

Some guy named Miller stretching at center ice prior to #Sabres skate in Pittsburgh. pic.twitter.com/KgrFn99SH4

There’s no trade yet, as seen above, as Miller prepares for Monday nights game against Pittsburgh.

Any trade moving Miller will be tough on the fan base. Being one of the worst team in the league, and then trading one of the best in the game, that you drafted. That hurts for the Sabres.