UFC on FOX 10: Henderson vs Thomson 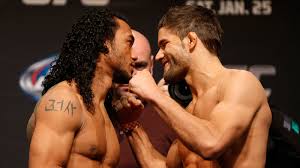 The co-main event of the night was the much anticipated heavyweight bout between Gabriel Gonzaga and Stipe Miocic. Gonzaga, who had won 5 of his last 6 fights, was the favorite going into this fight, but Miocic was determined to win. Gonzaga came out strong in the first round, making Miocic respect the power in his hands. Unfortunately he seemed to run out of gas midway through the first round. Then Miocic was able to control the rest of the fight, picking Gonzaga apart with jabs and uppercuts. In the final round Miocic was able to catch Gonzaga with a stiff shot dropping him to the mat. He tried to finish Gonzaga but he was able to hang on until the bell. Miocic was able to win by Unanimous Decision.

The main event of the evening saw two of the top lightweights gunning it out for a possible title shot against Anthony Pettis. Former lightweight champion Benson Henderson took on former Strikeforce lightweight champion Josh Thompson. The fight was back and forth with Henderson controlling the standup and Thompson getting the better of the ground exchanges. Henderson was able to win the the split decision victory. Judges scored it 49-46, 48-47 for Henderson while one judge called it 48-47 for Thompson. Dana White after the fight said, “I don’t think Henderson earned a title shot even with the win. It was a less then stellar performance from both fighters.” Thompson is even considering retirement after this loss but has yet to confirm anything further on the subject. This leaves the lightweight division in a state of limbo with champ Anthony Pettis injured and also top contender TJ Grant injured. Dana White will have to give serious thoughts on what is going to happen in this normally stacked division.