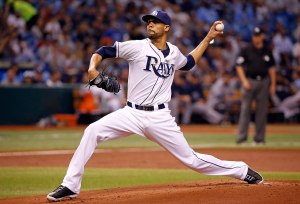 Once again the Tampa Bay Rays made the playoffs in 2013, finishing 2nd in the AL East. The Rays were serious contenders, and with out much help from lot of help from their front-line players. The Rays finished 2nd because everyone on the roster came up big at some point throughout the season. Who ever would have thought that James Loney, and Yunel Escobar would have the type of season they had?, Defensively, they are solid as well, but Joe Maddon is the main reason why the Rays continue with the success they are having. He is an under-the-radar type manager who puts a complete team on the field every day. In 2014 the Rays will look continue on being on of the most complete teams in the MLB, and battle to the last week of the season for a playoff spot.

Joe Maddon is one of the best managers in all of baseball and it shows. He has his team play the game the right way. Not relying on the long ball, playing “small-ball,” and has his pitchers use their defense to help them get through games. Maddon can take anyone on his roster and make them contributors. For example, James Loney and Yunel Escobar both had great seasons in the batters box and out at their positions. Both players were clutch through out the season and made great plays on defense. Kelly Johnson was another benefactor to Maddons coaching ways. Joe made sure he found a spot for Johnson to play because of his production with his bat. Kelly played everywhere from outfield, third, first, and his natural position of second last season. Johnson will be a key loss this season because of his versatility.

Not signing Fernando Rodney was smart of the Rays. He was going to cost a pretty penny and wasn’t as consistent  in 2013 as he was in 2012. Signing Grant Balfour was the right decision and will only cost them 6 million for 2 years. Balfour is one of the league’s most consistent closers and is very efficient. When on the mound he brings an intimidating factor. Grant isn’t afraid to give a hitter some chin music to back him off the plate. The Rays were missing an enforcer and signing Balfour will help with that.

Heath Bell was traded for along with Ryan Hanigan to help with depth. Bell will be a middle relief pitcher while Hanigan upgrades the catcher position. Ryan is known for his defense, ability to save runs, and his pitch calling. Many pitchers used him as their everyday catcher because they got comfortable with him and liked how he called the game. While Heath Bell is looking to get back into his All-Star form from his San Diego days. Joe Maddon has an ability to shape players back into their old successful ways. Bell is in a great situation to where he can get his confidence back on the mound.

Joe Maddon will rely on his three stars to carry this team once again. Evan Longoria, Ben Zobrist, and David Price. When healthy Longoria is one of the best players in the league. Evan is one of the best hitters in all of baseball, using all fields, bringing in runs when players are in scoring positions, and has great power to all fields. He is also one of the best defensive 3rd baseman’s who doesn’t give up many runs. While Zobrist is the utility player that Maddon loves using.the most, he can play pretty much any position on the diamond. While at the plate he is a great switch-hitter that can produce numbers anywhere in the line-up. David Price is the x-factor to this team. David is one of the best pitchers in baseball, and when he is on a roll the Rays can be unstoppable. He sets the table for the Rays. If they decide to trade him throughout the season they will be getting a kings ransom in return.

The Rays will have a team to compete once again this season. They have a very reliable pitching rotation and should be able to produce like they all did this past season. Look for the Rays to make the playoffs in 2014 and try and battle for a World Series.