Wawrinka’s High-Power: Consistent Force to be Reckoned With 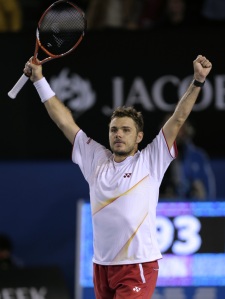 Last night saw an epic conclusion to Novak Djokovic’s 28 straight wins since his loss to Nadal in the US Open final of 2013 and to 24 successive wins at the Australian Open to the hands of Swiss 8th seed Stanislas Wawrinka in the Quarter Finals.

Rod Laver Arena saw a barrage of high power serves with Wawrinka pushing the throttle up to 219 km/h (136 mph). Impressively, Djokovic had successfully returned several of Stanislas’s 200+ km/h serves but Wawrinka still got away with 17 aces to Djokovic’s 7.

As the momentum swayed toward Wawrinka, we seemed to forget that Novak Djokovic is the 4 time champ, and rightly so. There was no giving up so easily for Djokovic, and a regain in mental composure helped the Serb tie the game at 2 sets all. While his fire had seemingly re-ignited, forcing a lengthy 5th set; it was Wawrinka and a monstrous backhand, reminiscent of another Swiss in the tournament, who would courageously triumph 2-6 6-4 6-2 3-6 9-7.

The win for Stanislas Wawrinka was the the first after an incredible 14 match losing streak against the current world number two. Wawrinka is now set to play Tomas Berdych in the semifinals on Thursday. The finals are shaping up to be very interesting this coming week.

One thought on “Wawrinka’s High-Power: Consistent Force to be Reckoned With”