Road Back to the Court 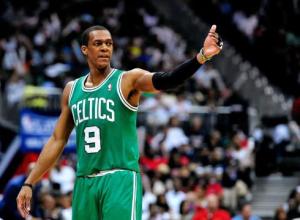 January 27th, 2013 started out as a great day for Celtics fans when they beat the Miami Heat 100-98 in double overtime. But it ended sadly when they found out their superstar point guard, Rajon Rondo, suffered a torn ligament in his right knee.

Fast forward to tonight’s game as Rajon Rondo returned to action a year after his injury. During the first half he looked rusty, missed shots, and looked very sluggish. After half-time, Rondo looked like his usual self, making great passes, getting to the rim, shaking off the rust and bringing the crowd to their feet with an amazing layup right after he was knocked down.

Rajon finished the night with 8 points, 2 rebounds, 4 assists, 2 steals, and 1 block. The team is trying to bring him back slowly, starting him out with 18-25 minutes per game. Do expect Rondo to get more minutes in a few games. Rondo shouldn’t struggle after losing Paul Pierce, Kevin Garnett, and Jason Terry this offseason. He is a floor general and makes everyone around him better.

Do you believe Rondo will be the same player before his injury? Vote on the poll below!