The Most Hated Man in the MLB 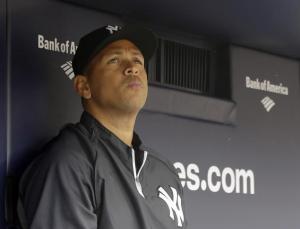 His name is Alexander Emmanuel Rodriguez, most commonly known as Alex Rodriguez, and he messed up terribly! The use of PEDs will mark A Rod’s name forever. He has received a suspension of 162 games (equivalent of one full season) as well as playoff games. Rodriguez has become the biggest villain in the MLB. He is the definition of what you don’t want an athlete to do in professional sports. His decision of using PEDs has made himself and the MLB get a bad image. It is saddening to see players cheat because that is what A Rod did, he cheated and players like him don’t deserve the respect of the fans.

What’s next for Alex Rodriguez?

Rodriguez isn’t going to get younger, he is 38 years old (39 in July) and is set to miss all of the upcoming season. In the games that he played last season he got booed in practically every stadium he stepped in. If he decides to come back and play after a year of inactivity, the boo’s will be much louder and the fans will be much angrier at him. I believe that it’s time for him to retire, he obviously doesn’t have love for the game for what he did, and he should feel ashamed and embarrassed for what he did and for the boo’s he already got. He would be doing himself and all of us a favor if he decides to finish his career.

It has become apparent that if a player is linked to PEDs, he will not be inducted to the Hall of Fame according to how the writers have voted the last couple of years. Even though Alex’s numbers may be hall of fame worthy, they do not mean anything anymore for his use of PEDs. We are seeing it now with players like Barry Bonds and Roger Clemens who are only getting somewhere around thirty percent of the vote while they are a seven time MVP and a seven time Cy Young winner respectively.

I think that with this whole A Rod situation should lead to more strict rules in the MLB regarding PED use. Right now this story makes me want to see the MLB use a one strike lifetime ban. A player can get away with using PEDs the first two times caught and get banned from the MLB after the third offense. If the MLB would ban players after the first use of PEDs, the players would definitely think twice before they use PEDs and would lower the amount of players using PEDs.

Alex Rodriguez has become the most hated man in the MLB.

One thought on “The Most Hated Man in the MLB”