Will Johnny Manziel Succeed in NFL? 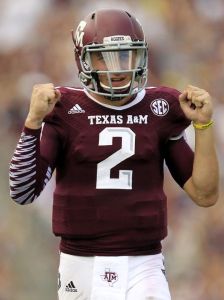 Last season, Johnny Manziel stole the show with his amazing plays and won the Heisman as a freshman, becoming the first to do so. During the off-season, “Johnny Football” lost respect from fans, football coaches, and Heisman voters. Don’t let the off-field issues fool you though. He was a young kid living the life and soaking in all the benefits, but it never slowed him down on the gridiron. Now with the NFL draft just months away, football GM’s and scouts are starting to put all the negativity associated with Manziel to the side and considering him as a top 5 pick, as they should.

Manziel is a game changer, there is no way around that. When the football is in his hands, magic happens. He has great ability to scramble, possesses a great arm with accuracy, is dangerous with his feet and has an instinct to score points. Johnny will be drafted by a NFL team that needs a lot of help, and drafting him will only help. Manziel is a franchise quarterback. He has all the tools in his arsenal to succeed in the NFL.

Johnny may be considered “small” to play quarterback in the NFL but his arm strength will put a stop to that. Manziel has made plenty of throws in his college career that have made fans say “wow” because of how he is able to sling the ball and put it in small windows. His deep balls are also some of the best in the draft class. Just take a look at the throws he made against Alabama in this seasons match-up.

Dangerous with his Feet

Johnny ran a lot in 2012 but in 2013 he decided to show people he can throw the ball. He doesn’t look very fast for his size but he freezes defenders with great juke moves and quick changes of direction. Many football fans believe he won’t be able to run like crazy in the NFL as he did in college, but he won’t have to. Colin Kaepernick, Cam Newton, Robert Griffin III, and Russell Wilson all ran in college but changed their game once playing in the NFL. They all learned to run when it is needed and don’t rely on it as a main focal point of the offense. Manziel will be able to do the same thing, but with big play ability. There is nothing much to say about how dangerous he is with his feet, just take a look yourself.

The best asset Manziel possesses is his playmaking ability. He always keeps the play alive and is very hard to sack. Whenever he feels the pressure, he knows exactly where to move and always finds the open receiver or takes off for big yards. His knack to keep plays alive for huge yards isn’t something you teach a player, it comes from great instincts and a great feel for the game. For example, against Duke in the Chick-fil-A Bowl, Manziel made an amazing play. While scrambling away from pressure and leaping over a player, he was still able to keep his eyes down field and find the open receiver for the touchdown. Check it out.

Johnny Football has everything an NFL scout wants in a quarterback. Great arm strength with accuracy, ability to make plays with his feet, great instincts for the game, and most importantly, he is a game changer. He will truly succeed in the NFL. He will be great for the game of football and will have many people following whichever team drafts him this season.

Do you believe Johnny Manziel will have a good career in the NFL? Yes or no, and why? Please leave your response on the comments section below.

5 thoughts on “Will Johnny Manziel Succeed in NFL?”