Through the Ups and Downs 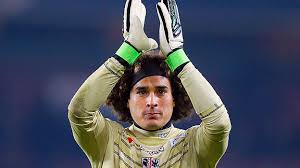 Not much is known anymore of the former Club America goalkeeper, Guillermo “Memo” Ochoa, after his departure to France in 2011. Not much was expected when many found out that he would be going to AC Ajaccio, especially when the team had barely gone up to play in the Ligue 1. Many doubted his choice of team and threw Memo out of the spotlight after his departure.

Although not the most victorious of teams, Guillermo has shocked the French public and has even become a main figure of the team. Voted player of the year twice out of his three years playing there, Memo has turned heads and made AC Ajaccio begin to appear in the spotlight not only in France, but in Memo’s native country of Mexico. In the city of Ajaccio, Memo has risen to superstar status and is even referred to by the club supporters as “San Memo” (Saint Memo). The young Mexican goalkeeper has even gotten offers by major teams like AC Milan and Liverpool, but Ochoa has refused them to continue to play on the team that has welcomed him with open arms.

Once Mexico’s number one goalkeeper when playing in Club America, and two time champion of the CONCACAF Gold Cup, Memo seems to be on top of his game. Now with so much international attention on Guillermo Ochoa, one would think that his national soccer team would be asking the young goalkeeper to play for them as they had once done when he played in Club America, but rather they have forgotten him. It began when Javier “El Vasco” Aguirre selected Oscar “El Conejo” Perez to play in the 2010 FIFA World Cup South Africa. After the World Cup, four head coaches have come and gone for Mexico’s National Soccer Team and it wasn’t until Miguel Herrera was named head coach that Memo finally got called up for two games. The two games passed and yet again Memo was thrown once again. Now that the World Cup is just around the corner and considering Memo’s performance in France, many believe that Ochoa deserves to be called on once again and defend his country in the World Cup.