The Nebraska Cornhuskers are coming into the bowl game after a very disappointing season under head Ccach Bo Pelini, finishing the season with a loss against rivals Iowa in the Hero Game, 38-17 at home. The Huskers also lost 34-23 in Minnesota after being the favored team. The Huskers did begin the season 5-1, only losing to UCLA 41-21, but they finished the season 3-3. They were faced with injuries all season, including to Taylor Martinez and starting offensive lineman Spencer Long, both getting season ending injuries midway through the season.

Pelini is in his sixth season with Huskers, with a combined record of 57-24(.704) and a 2-3 record in bowls, losing three straight. At the end of the season, most of the fans wanted him to go, but the athletics director decided to keep him for the long run.

The Georgia Bulldogs are coming off a season in which they were favored to go back to the SEC championship and face Alabama, but neither of those teams made the championship. The Bulldogs, led by Senior QB Aaron Murray, won’t be playing in his hometown state of Florida Wednesday due to an injury. The Bulldogs started the season going 4-1 with wins over South Carolina and LSU both at home. The Bulldogs started the down hill ride from there on as they finished 3-4 including losing at Vanderbilt and at Auburn with an incredible ending. The last game of the season the Bulldogs beat rivals Georgia Tech on the road 41-34 in double OT.

The Bulldogs head coach Mark Richt has been with the team for 12 seasons including an outstanding overall record of 126-44(.741) and a bowl record of 8-4 which includes two Sugar Bowl wins and two SEC championships.

These two programs met each other last season in the Capital One bowl, which the Bulldogs won 45-31 before that the two teams only met one other time in 1969 which the Huskers won 45-6 under the legendary head coach Bob Devaney.

Nebraska Junior RB Ameer Abdullah has been a great leader for the Huskers offense leading the team in rushing with 1,568 yards and a total of 8 touchdowns. For being an All-American, he can also get it done in the air with 232 receiving yards and 2 touchdowns. Nebraska fans should be happy because he has one season left with the team. 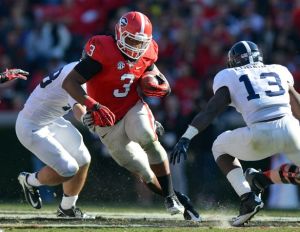 Georgia’s Sophomore RB Todd Gurley had a incredible season even with missing three games towards the end of the season. During the season Gurley had a rush for 903 yards and 10 touchdowns. Without Aaron Murray, playing watch for Gurley has to have a huge impact for the Bulldogs offense.

This year Nebraska is coming out and playing with vengance and Georgia is playing with a chip on their shoulder after a very disappointing season for both teams. These two programs are almost identical with the stats, the only difference is that Nebraska is 93rd in passing and 19th in rushing and the Bulldogs are 16th in passing and 57th in rushing. I have to give the edge to the Cornhuskers this year for starting a very good New Year’s game off on the right foot. Watch for the RB’s for each team to have big games without the starting QB’s playing.