Gunner’s in Need of Some Ammo? 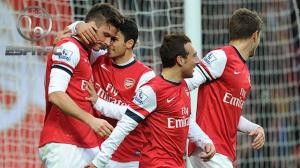 Ever since the transfer of Mezut Ozil, the Arsenal Gunners have been in terrific form in both the Premier League and the UEFA Champions League. They are currently leading the table with 39 points, one point ahead of Manchester City with Chelsea trailing Arsenal with 37 points, but are the Gunnes burning out?

There have been signs of burnout with the Arsenal players with Wilshere getting a two match ban for cursing at the Manchester City fans after Manchester City defeated Arsenal 6-3 in their first clash in the Premier League. The burnout isn’t just with the team but also between the players as well. After the loss against Mancherster City, Mezut Ozil didn’t go salute the fans. Mertesacker was then seen approaching Ozil and blasting him on why he didn’t salute the fans. Ozil just kept walking away so their was some arguments between the players in the locker room.

Theo Walcott and Lukas Podolski came back at a great time since the Gunners were in need of more players. Arsenal needs to bring in a top class striker. Karim Bezema, Robert  Lewandoski, Alexandre Pato would be great choices help Giroud in the lone striker position. Javier Hernandez would also be a good candidate for the Gunners. With great playing time, Hernandez is very dangerous inside the box. With so little playing time at Manchester United, Hernandez will possibly consider leaving to Arsenal.