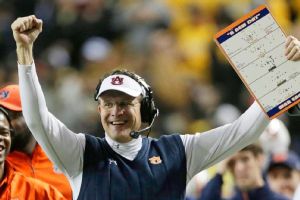 Gus Malzahn is the AP’s coach of the year after taking Auburn from a 3-9 record to a 12-1 record in his debut season.

After last season’s embarrassing 3-9 record Auburn’s AD fired former Head Coach Gene Chizik and promoted OC Gus Malzahn to HC this season and the Tigers went 12-1 winning the SEC and finishing No. 2 in the Nation. Auburn plays in the National Championship game Monday, January 6 against No. 1 Florida State.

“It’s very humbling,” Gene Chizik said Monday. “Any time you get awards like this, it’s a team thing, as far as our staff and our players. It’s been fun to be a part of this year.”