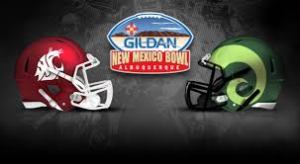 Provided by the Pac-12

This bowl season starts off with the 7-6 Rams of Colorado State’s going up against the 6-6 Cougars of Washington State; the battle of the states. For the Rams, this is the first time they have become bowl eligible under second season head coach Jim McElwain. As for the Cougars and Mike Leach, this is also their first bowl game after two years under Leach. Both coaches have flipped their respective programs around where the Cougars went 3-9 and the Rams went  4-8 and both teams missing out on a bowl games last season.

This season, both teams are led by offensive power houses. Colorado States has running back, Kapri Bibbs, who on the season have rushed for more than 1,500 yards and 28 touchdowns and Washington State has quarterback Conner Halliday who has thrown for more than 4,000 yards and 28 touchdowns. Other players to keep a eye out for in this game are Colorado State quarterback Garrett Grayson, senior safety for the Cougars and All-American by the Associated Press Deone Bucannon, and Shaquil Barrett linebacker for the Rams.

As a whole, both teams are struggling on defense. The Rams allow 417.3 yds per game and the Cougars allow 446.6 yds per game, which is going to put both defenses through a test Saturday in Albuquerque, New Mexico.

Even though both teams are struggling on the defensive side of the ball, I have the Cougars sneaking out a win in this game 38-34 in a hard fought battle. I have Kapri Bibbs rushing for more than 150 yards and recording a TD, but I don’t think it’s going to be enough to keep up with Conner Halliday, the high powered passing game, and Mike Leach.