What’s Right and Wrong With The Oilers and How Can They Fix It? 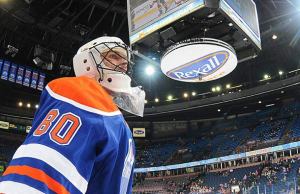 The Edmonton Oilers are a team with a lot of good young talent. But every year they never seem to make the playoffs, and when they don’t make the playoffs they always seem to get the first pick of the draft. The number one pick of the 2010 draft was Taylor Hall. He is becoming a great hockey player with a lot of potential he has been good since he came into the league, this kid is looking to do some big things during his career with the Oilers.

The year after they drafted Hall the Oilers once again got the first pick in the 2011 draft. They drafted Ryan Hopkins, he had a good rookie season with the Oilers. With the combo of Hopkins and Hall I can see the Oilers being a team to watch out for in a few years after they fix and get some core pieces for their team.

For the 3rd year in a row they got the first pick of the draft and it turned out to be Nail Yakupov. This kid is a stud, he is a guy that you want to build a franchise around. This kid has a great shot, good speed, and he can shoot the puck from almost anywhere on the ice. You have to always keep an eye on him and don’t let him or the other young guns of the Oilers open to take a shot. He has great hands that can dangle you anytime you want.

This year is another crash and burn year for the Oilers who are 5 and 15 and are close to last in the league. If I was a fan of the Oilers I would want to see change of this team now and quick. I would be sick of getting the first pick of the draft year after year. The general manager needs to trade some of the young guys on the team, they have too many and they have good trade value that could get them some good value in return for those guys.

Nail Yakupov looks like the odd man out in Edmonton, I would rather take Jordan Eberle. They already have guys that can change the franchise in Hall and Hopkins. I would trade Yakupov for a top 2 defensemen that can help out their defensive core that is not that good. They also need a young goalie that can win them some games because that is another problem they have in Edmonton, their goalies are so bad they can’t even win them games. The Oilers need to do these things to save their franchise, which will lead to more ticket sales and the happiness of their fans.

They have an OK goalie right now, he is better than the other goalies they have had over the years. He can win games sure, but they need to give him a better team to be surrounded by. He is not a guy that can take you to the playoffs and win the Stanley cup. He is a player that is better suited for a team that’s a playoff contender not a rebuilding team. Don’t worry Oilers fans if the GM makes some good moves and signs some good free agents you guys will be just a few more years away from being a playoff team and contenders for the Stanley cup.