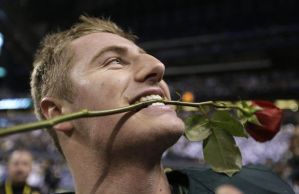 Jameis Winston and the No.1 Florida State Seminoles easily won the ACC, beating the No.20 Duke Bluedevils. The Seminoles were -27.5 point favorites and they delivered, winning by 38 points. FSU started off slow, but eventually got going in the 2nd quarter.

After halftime, the Seminoles exploded going up 38-0. Heisman candidate Winston had a decent night throwing for 330 passing yards and 3 touchdowns, but with a pair of interceptions. After the game, the Florida State Seminoles extended Jimbo Fisher’s contract to 5 years for $21 M, which is going to lead the Seminoles into the National Championship game next month against the Auburn Tigers who won the SEC. For the Duke Bluedevils, they beat the school’s season record for most wins in school history with 10, they’re projected to play in the Sun Bowl against UCLA on December 31.

#7 Stanford came out victorious after beating #11 Arizona State in a hustle environment. The Wildcats were undefeated at home before tonight’s loss to the Cardinals, 38-14. The Stanford offense had an incredible night with 517 total yards, lead by running back Tyler Gaffney who had 133 yards and 3 touchdowns on only 22 carries. Tyler Gaffney’s 3 rushing touchdowns in the 1st half is tied for the most in an 1st half by a Pac-12 player this season.

After tonight’s loss, the Arizona State Sun Devils are projected to play in the Holiday Bowl December 30 against Kansas State. Stanford is smelling roses this year once again as they will travel down state to play in the 100th Rose Bowl game against the Michigan State Spartans, the winners of the B1G Ten.

Michigan State beat the Buckeyes tonight in Lucas Oil stadium 34-24, as the Spartans lock up a date with Stanford Cardinal in the Rose Bowl on New Year’s Day. This was a do or die game for both the Spartans and the Buckeyes, as if either of the teams lost they would be out of a huge BCS game. Since the Buckeyes lost ,the Auburn Tigers are going to jump into 2nd place on the BCS standings and face the Seminoles of Florida State January 6, 2014 in the Vizio BCS National Championship in Pasadena.

Hopeful Heisman candidate Braxton Miller didn’t have such a good game through the air, only passing for 101 yards and 1 touchdown completing only 8 of 24 passes. He did have a monster game running, which the Spartans No.1 D couldn’t seem to stop, as Miller ran for 142 yards and 2 touchdowns. Tonight’s loss snaps the Buckeyes 24-0 run since Coach Urban Meyer took over. Coach Meyer had this to say, “I really wanted these guys to experience something special and I think they will, I think they’ll get invited to a very good bowl game and when they do, they’ll face a good Buckeyes team”.