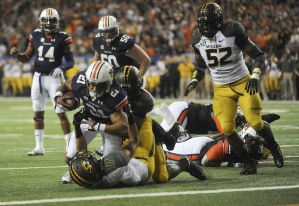 Two teams went home with extra trophies and the others went home empty as the Auburn Tigers won 59-42 and Baylor Bears won 30-10 in Waco.

Auburn and Missouri should both be happy after this very successful season. They both finished at the bottom of the conference last season and neither made a bowl game. This year they went against each other in the SEC Championship. Auburn won behind a powerful rushing game that had a total of 545 yards rushing and 677 total yards. Running back Tre Mason had 304 rushing yards and 4 touchdowns on 41 attempts, giving him 6.6 yards per carry.

Missouri also had a very good offense with a total of 534, but the turnovers(2) and penalties(7) hurt them in this game. The teams combined for 101 points, which is a record in any SEC Championship game that is known for it’s defense. Gus Malzahn is the only coach since 1943 to win the SEC Championship his first season with the team. Now the Tigers of Auburn have to wait to see what happens in the B1G and ACC games as they can go to the National Championship game with a loss from either Ohio State or Florida State. As for the Tigers of Missouri, currently they are projected to go to the Outback bowl and play Iowa.

The Baylor Bears clinched the BIG 12 as they beat the Texas Longhorns 30-10. After Oklahoma State’s loss to Oklahoma earlier today, the game between Baylor and Texas became the game for the BIG 12. Texas seemed to never get it going on offense as they only scored 3 points in the first half and ending the game with 10. Texas tried to fight back in the 4th quarter, but the Baylor offense was too much as they obtained 508 yards compared to Texas’ 217 yards.

The Longhorns started the season going 1-2 and  fired their defensive coordinator. They would then go on a 6 game wining streak to get to 7-2 and eventually finish the season 8-4(7-2). Mack Brown was on the “hot seat” at the start of season and he may be back on it if they lose in the bowl season. Currently, Texas is projected to play rival, Nebraska Cornhuskers, in the Buffalo Wild Wings Bowl. As for Baylor, they won a trip to play in the Fiesta bowl against an at large team.