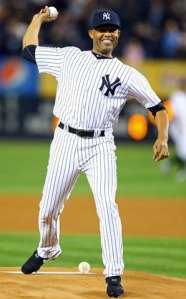 Last Thursday I was at Wal-Mart doing my gray Thursday shopping and the store was an absolute jungle! The famous song by Guns N’ Roses’ “Welcome to the Jungle” was playing in the background in my mind and that inspired me to tell you my top 5 closer entrance songs of all time.

What a way to start this off! Fans heard the bells ring in the stadium and knew that Hoffman was coming to shut the door. Trevor obviously had great stuff, but my personal favorite pitch of his was his change up. As for the song, the first two lines say “I’m rolling thunder pouring rain I’m coming on like a hurricane,” that pretty much defines what Hoffman did; and throughout his 18 year career he accumulated 601 saves to be second of all time in saves.

John Smoltz played for the Braves and was brave enough to use this song as his entrance song. Unlike other closer songs that are usually hard rock or used to intimidate, Smoltz when a different route and utilized this awesome song from the 1970’s. I always thought that Smoltz used this song to puzzle the opposing hitters since he is the only closer I can remember using this type of genre for his entrance song and what he did worked earning a record of NL saves in a season with 55 in the 2002 season. For having the courage to walk out to this wonderful song, “Dancing Queen” earns the 4th spot.

#3 “Bad to the Bone” by George Thorogood. Used by Dennis Eckersley and Goose Gossage

I guess we can say that these two closers were “bad to the bone”. I am really surprised that virtually no closers have used this as their entrance song in recent time. It is definitely a song that I would strongly consider if I were a closer. Both Eckersely and Gossage pitched in the 1970’s and 1980’s they had great careers and combined to save 700 games, 310 saves by Gossage and 390 saves by Eckersley. Hopefully a new great closer can use this song again and perhaps move up in the ranks, but for now it sticks and earns 3rd place.

#2 “Welcome to the Jungle” by Guns N’ Roses. Used by Craig Kimbrel and Eric Gagne

If you haven’t heard this song or seen a closer enter to this song you are really missing out. When Eric Gagne entered a game it was literally game over. He still holds the record for most consecutive saves converted with 84 saves that came from August 26, 2002 to July 5, 2004 including a perfect 2003 season without any blown saves. Craig Kimbrel is arguably the best closer in the MLB today. His stuff is electric, making hitters look foolish with his high 90’s MPH fastball that tends to rise as it gets to home plate. When you see the flames on the screen at Turner Field and hear “Welcome to the Jungle” it is truly a special moment.

Simply the Greatest closer of all time! 652 saves along with a song that he made his own by having such an amazing career. All announcers had to say was “enter sandman,” and we knew who was coming.

Well those are my top 5 closer entrance songs. In what order would you have put these songs or which ones do you have in your top 5? Leave your comments below!